Whenever an online selling venue makes a change, or Google updates it's algorithm, or Facebook changes the layout (again), there is a flood of "woe is me" posts from business owners. Sometimes it's the very changes to exact same business owners have been clamoring for but it's not exactly the way they pictured it working so they aren't happy and want it tossed out immediately and everything back the way it was.This immediate negative reaction to a new feature that has just been released (or has only been announced and not released yet) is counterproductive.

If you are doing this, stop it, right now.  This is plain and simple fear of chance because the new feature hasn't even been giving a fair test ride yet and is being dismissed.

Stop immediately looking for what is wrong with new features and start giving them a fair chance to work for you. Look for the opportunities just as hard, or harder, than you look for the faults.

What prompted this post is Facebook Timelines for Pages. When they were announced many people hated them for a number of reasons, the big one for businesses was that you could no longer have a custom landing page to welcome people who hadn't liked your page yet and encourage them to do so (often with a coupon, free video, etc.). However now a month since Timeline became available for Pages and a few days after it became universal for Pages we have this article from TechCrunch on the impact of Timeline. Here's the key points for Pages under 1 million Likes (that's most of us): 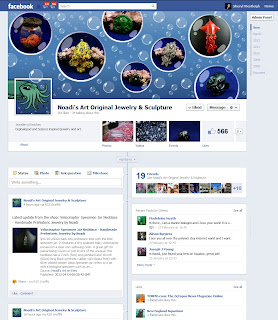 So while Timeline isn't getting pages Likes at a faster rate than before (or more importantly the rate hasn't gone down even with the loss of custom landing pages), your existing fans are interacting with your Page far more and that is incredibly important.

Sometimes new features do flop or negatively impact your business no matter what you do. When that happens it's terrible and you may feel at a loss for what to do and it makes you fear every new change. Fearing change though makes you less flexible and adaptable which becomes a cycle where every change, even those that might have helped you, are resisted until you either pull out of the cycle or your business fails. Even big companies that have been around for decades can succumb to this, look at Kodak which used to be the premier name in photography but is now in bankruptcy because it held on to film for so long that it was too far behind when it started making digital cameras to catch up.
Posted by Unknown at Wednesday, April 04, 2012 1 comment: